Why Religion Is Natural and Science Is Not

Contrary to common belief, interest in the supernatural thrives in Norway

At international meetings American academics, especially those who are interested in the scientific study of religion, are bombarded by their European colleagues with the same question time and time again: “What’s wrong with America?”  No doubt, when European academics raise this question, it typically includes some political undertones, but their query most directly concerns the widespread religiosity in America.  In survey after survey, substantial majorities of Americans report rates of belief in God, religious affiliation, and church attendance, which far exceed the rates reported by people in other developed nations around the world and in northern Europe, in particular.  Our European comrades want to know, in short, why Americans are so religious.

For decades the data from America has substantiated these questioners’ premise (at least until quite recently).  Another question worth considering, however, is whether their assumptions about the precipitous decline among northern Europeans of religiosity and, more generally, of interest in the supernatural over the same time period are sound.

At least two comments seem in order.  First, the decline of religiosity that surveys in northern European countries seems to square with the predictions of theories about secularization.  As I have noted in earlier posts, secularization theorists propose that the conditions in affluent societies, with comparatively trustworthy public institutions and relatively equitable distributions of wealth, in effect, diminish citizens’ interest in religion.  These countries serve as the parade cases for this view.  For example, in the 2012 British Social Attitudes Survey(link is external), “no religion” constituted the largest response (at 48%) to questions about religious affiliation.

Second, what the survey findings about northern Europeans’ religious disaffection and the startlingly empty churches across that region show is a decline in conventional religiosity.  The decline of these countries’ state-supported churches is uncontroversial.  It is less obvious, though, that this constitutes a decline of religiosity, let alone a decline of interest in supernatural agents with counter-intuitive properties. 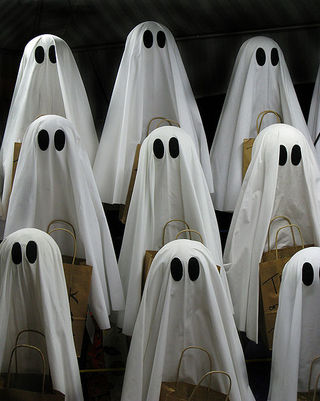 An Epidemic of Norwegian Ghosts

Recent evidence from Norway, which is, by some measures, one of the most secularized nations in the world, suggests that belief in the supernatural continues to thrive.  Andrew Higgins reports(link is external) an abundance of interest in ghosts among Norwegians over the past decade.  A tenth of the population (more than twice as many as those who attend church), for example, regularly tune into the hugely popular television program, “The Power of Spirits,” which specializes in ghost stories from across the country.  Hundreds of Norwegians have written to the show requesting aid in dealing with the myriad ghosts who are allegedly haunting their houses and places of employment.  “Alternative Expo,” which Higgins describes as “a jamboree of the occult,” will be held this month in Oslo.  He reports that even the Norwegian royal family is getting in on the ghostly action, with one of Norway’s princesses working to aid to people wishing to make contact with the spirit world.   Continue reading Psychology Today